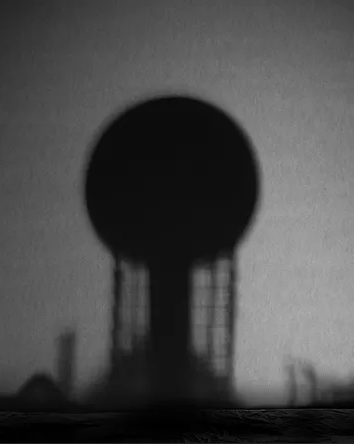 In its beginnings, photography was considered the means by excellence to document architecture, as it was not perceived as an art, but as an impersonal process of copy of nature. Photography, as a trace, keeps an initial bond with its referrer material, although this doesn’t imply automatically the similitude between the photographed object and the object – the angle, the illumination, among other factors, determine this similarity, and therefore, how the viewer receives it-. But besides, similitude in photography refers to an object by its similarity to it, even if this object doesn’t really exist. “Archigraphies” plays with these concepts of representation of reality through photography, confronting the viewer to images and the process we need to obtain them.

As arising from fog, in a crepuscular atmosphere, architectonic forms appear, with blurred contours, that take us to those systematically photographed industrial structures by Bernd and Hilla Becher, from the 1950’s. While the Becher’s work intention was producing a perfect series of different forms and shapes, applying a typological method comparable to the encyclopedic approach used in botanics and zoology, mantaining the same conditions of capture, measure and framing, in “Archigraphies” this approach, apparently objective and cientific, disappears to let evocation take place. In this case, there is no detailed description of reality, but evocation of an architecture that refers to images that have a substantial space in contemporary artistic production. The cold documentary approach is replaced by the resource of chiaroscuro, the magic of shapes emerging from darkness.

MÒNICA ROSELLÓ
She works as a freelance photographer in advertising and architecture, and developing her personal projects.

She has imparted numerous workshops, residencies and trainings, and she collaborates with A BAO A QU Association for image teaching.

Since 1995, they work together in various projects. From this collaboration we can highlight “The architect’s closet”, an installation that talks about the creative act in architecture; “Object of observation”, a visual game that starts from the viewer’s role in the show; “Tabula rasa”, a reflection on the mechanisms of construction of memory; “Reading Between Streets”, the importance of using public space as a key to communication, and “Double exposition”, travelling as a means of survival.